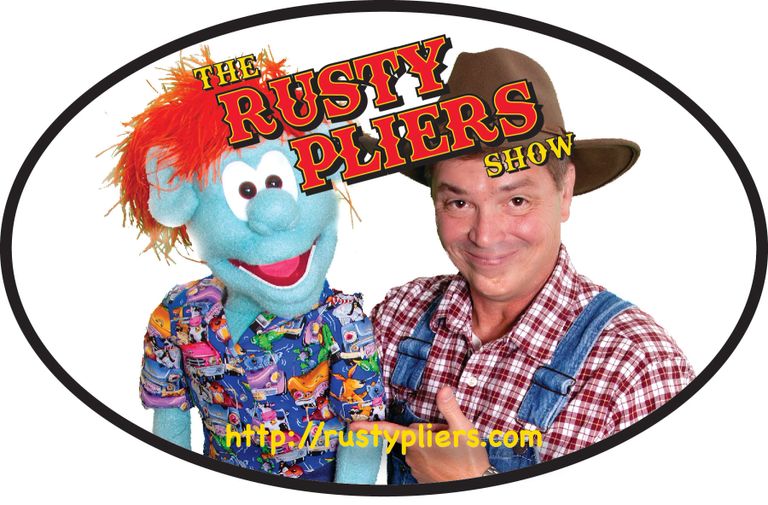 The Story of Rusty Pliers

Rusty invites you, along with his two best friends: Meatball and Waffles, to have the best rip-snorting, knee-smacking puppet show in the world.  By adding color into the scenes, you can fill his adventure with brightness, joy, and artistic expression. Just what he needs to fulfill his dream of having a puppet show.

The Story of Rusty Pliers Video

Rusty Pliers and his friends Meatball and Waffles bring you "The Story of Rusty Pliers Coloring Book". By adding color into the scenes, you can fill his adventure with brightness, joy, and artistic expression. Just what he needs to fulfill his dream of having a puppet show.

The Skinny On Rusty Pliers

Rusty Pliers is America’s favorite Hillbilly Comedy Ventriloquist and Magician.  Rusty is from a small town in St. Louis Missouri with no phones, no lights, and no power, called Mehlville.   Rusty Pliers has performed his unique “Country-Fried” magic and ventriloquism show to children from every continent.

You can see Rusty performing on cruise ships, fairs, libraries, and schools.  Rusty has also performed at many church events, conventions, and corporate events.  Rusty has performed on MSC Cruise Line, and Royal Caribbean Cruise Line, as a guest Children’s Entertainer.

During Apple Picking Season Rusty performs at Eckert’s Fun Farm in Millstadt Illinois.  You can see Rusty's show on weekends during September and October.  Rusty has performed at the Eckert's Millstadt Fun Farm for the past twelve seasons.

The Rusty Pliers Show doesn’t require extensive setup.  Rusty and his friends Meatball and Waffles don’t use any fire, offensive, bizarre, or questionable material during their performance.  Based in St. Louis Missouri, Rusty performs locally as well as traveling across the United States. To Schedule A Performance Call 314-691-0507

What Others Say About Rusty Pliers

Good Morning.  My granddaughter and I wanted to thank you for the great performance in Monett Library this last Tuesday.  We so appreciate the programs there but really enjoyed your program best of all!  Bonnie, Monett MO

Rusty and his friend Meatball entertained at our school. This is the second time we have had him. The kids and staff really enjoyed the performance. We highly recommend Rusty for your event.  Mark F, St Louis, MO

Rusty Pliers did a great job! He kept the kids entertained and happy! Amy B. Newton, KS

Rusty Pliers gave an excellent performance. He was so great to the kids. Everyone attending commented about how pleased they were–there were 57 kids and 23 adults–smiles were everywhere!!!  Cindy H. Rockville, IN

I hosted an 8th birthday party for my son, and invited Rusty Pliers for a fresh, different type of party (how many times can you go to Bounce U??). I was thrilled by his very reasonable rate and his flexibility regarding date/time/location.  He arrived promptly and immediately engaged all the kids, every eye was on him! They laughed and clapped and had a creative, live experience.  RP performed with Meatball, did magic, told jokes and made balloon animals. The party was hectic but RP never lost his happy, positive vibe.  Some of the kids have different challenges and he met them all where they were at- treating each child like they were the only one in the room. He stayed far longer than expected and was truly committed to making sure my son and his friends were at the best birthday party ever!  I would recommend Rusty Pliers, without hesitation. I am a very hard person to please and RP was everything I wanted for my son on his birthday.  Thank you Rusty Pliers! Hope to see you soon!  Ellen F. St. Louis, MO

There was a lot to like about working with Rusty Pliers. He is reliable. He is not demanding. He doesn’t need any equipment. He keeps in touch ahead of time.  None of that would matter if his show didn’t work with he audience, though, and I am happy to say that his act worked splendidly. The front row audience included a toddler who was enthralled as soon as he made a string appear from nowhere and an older kid who was eager to see through any trick the magician tried to pull on him. By the end of his first trick, that kid as enthralled, too.  Rusty Pliers is great working with children. But he also played to the second row. There were enough jokes for the adults standing behind the children to keep them interested and happy. So the entirely audience had a great time. I couldn’t ask for more!  Brian R. St. Louis, MO

Rusty Pliers provided a fun filled event for children and adults alike. He took the time to interact with all the kids and made everyone feel special. Rusty provided a good time for everyone. I would recommend him and his puppet Meatball to anyone.  Natasha L. St. Louis, MO

Rusty and his sidekick Meatball put on an excellent show at our annual banquet. His show was entertaining for all and Rusty did an excellent job of reaching our audience. Would highly recommend having Rusty come to any event. Thank you Rusty!  Jessie R. Booneville, MO

Booked Rusty for a show at 3 pm. He showed up 2 hours early and started making balloons for the kids. He put on a great show for both the kids and the adults. He then stayed for 2 hours after the show and made more balloon animals for the kids. He went above and beyond what I expected. Thanks again. I would definitely book him again. Todd O.

Do you have more questions? Are you interested in collaborating on a project? Send me a message, and I will get back to you as soon as I can.